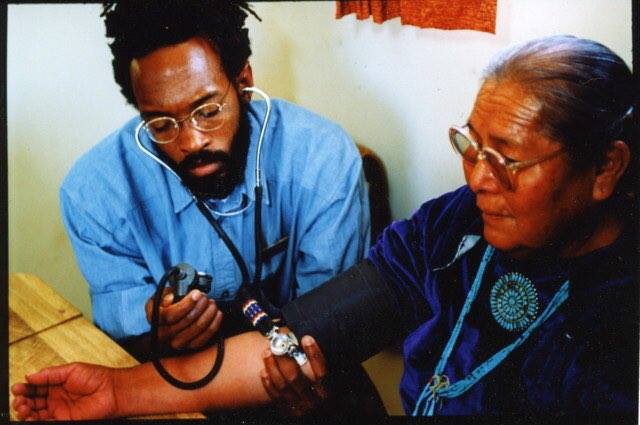 Photo is Courtesy of Chip Thomas, All Rights Reserved

Born in Raleigh, North Carolina, James “Chip” Thomas like his father became a medical doctor.  While attending Nashville’s Meharry Medical College, one of the nation’s oldest and largest historically black academic health science centers dedicated to educating physicians, he led First Aid teams in Liberia during the summers.  As an African American, visiting Africa had a profound effect on the young Dr. Thomas.  He would return again to Africa a few years later to join a medical team trekking the length Africa. A 12,107-mile cycling trip, completed in record time, earned Chip’s team a record spot in the Guinness Book of World Records.

Committed to universal and public health, In 1987 Chip signed a 4-year contract to practice medicine on the Navajo reservation in a government run facility.  He saw himself returning to a developing country later on, but began to appreciate the parallels between Africa and the Navajo Nation.  He fell in love with the people and the land. Almost three decades later, Dr. Chip Thomas still resides on tribal lands in Northern Arizona treating Navajo patients in a rural community.

Dr. Thomas has said that his work as a physician brings him both happiness and sadness.  Photography became a way that he could help reconcile the dualities of medical practice into art that restored balance and reflected back the beauty that he saw around him.

To learn more about Chip Thomas’ story and journey

through medicine, art, and activism,

come join us March 25th from

Why Medicine Needs Art and people like Jill Sonke from the University of Florida.