When it comes to quantum mechanics, it’s easier to show than tell.

That’s why artist residencies at particle physics labs play an important part in conveying their stories, according to CERN theorist Luis Alvarez-Gaume.

He recently spent some time demonstrating physics concepts to Semiconductor, a duo of visual artists from England known for exploring matter through the tools and processes of science. They’ve done multiple short films, museum pieces and festivals all over the world. In July they were awarded a CERN residency as part of the Collide@CERN Ars Electronica Award.

“I tried to show them how we develop an intuition for quantum mechanics by applying the principles and getting used to the way it functions,” Alvarez-Gaume says. “Because honestly, I cannot explain quantum mechanics even to a scientist.”

The physicist laughed when he made that statement, but the artists, Ruth Jarman and Joe Gerhardt, are comforted by the sentiment. They soaked up all they could during their two-month stay in late 2015 and are still processing interviews and materials they’ll use to develop a major work based on their experiences.

“Particle physics is the most challenging subject we’ve ever worked with because it’s so difficult to create a tangible idea about it, and that’s kind of what we are all about,” Jarman says, adding that they are fully up for the challenge.

Besides speaking with theorists and experimentalists, the artists explored interesting spaces at CERN and filmed both the construction of a new generation of magnets and a workshop where scientists were developing prototypes of instruments.

“We also dug around a lot in the archives,” Gerhardt says. “It’s such an amazing place and we only really touched the surface.”

But they have a lot of faith in the process based on past experiences working in scientific settings.

A 2007 work called “Magnetic Movie” was based on a similar stay at NASA’s Space Sciences Laboratories at UC Berkeley, where the artists captured the “secret lives of invisible magnetic fields.” In the film, brightly colored streams and blobs emanate from various rooms at the lab to the sounds of VLF (very low frequency) audio recordings and scientists talking.

“Are we observing a series of scientific experiments, the universe in flux or a documentary of a fictional world?” the artists ask on their website.

The piece won multiple awards at international film festivals. But, just as importantly to the artists, the scientists were excited about the way it celebrated their work, “even though it was removed from their context,” Jarman says. 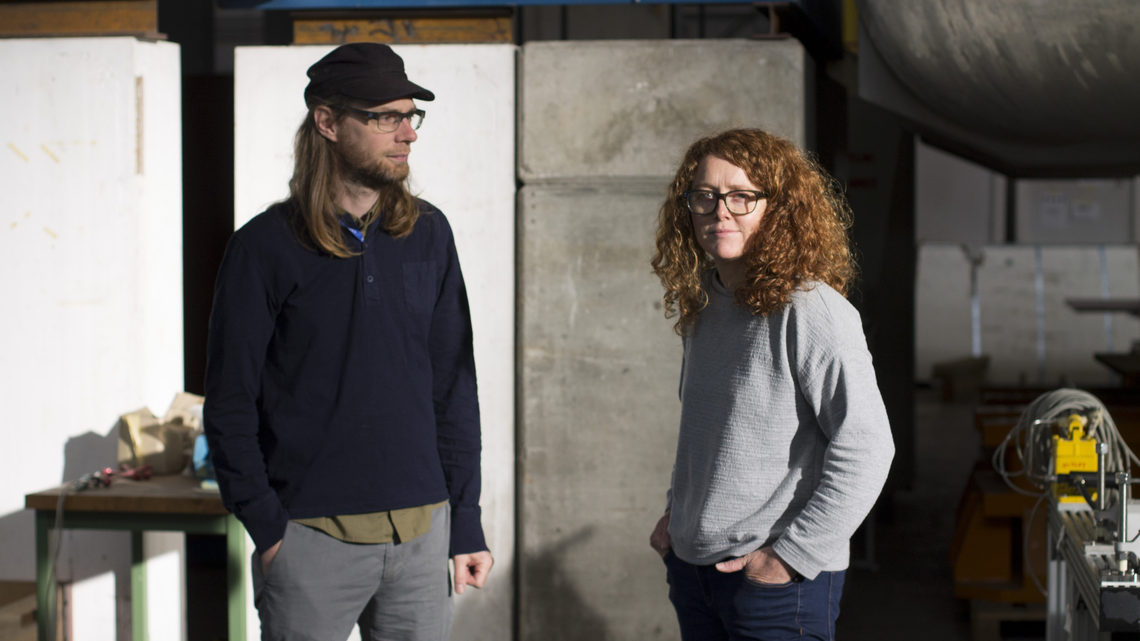 At the Department of Energy’s Fermilab, another group of artists has taken on the challenge of “visualizing the invisible.” Current artist-in-residence Ellen Sandor and her collaborative group (art)n have been brushing up on neutrinos and the machines that study them.

Their goal is to put their own cutting-edge technologies to use in scientifically accurate and “transcendent” artworks that tell the story of Fermilab’s past, present and future, the artist says.

Sandor is known as a pioneer of virtual photography. In the 1980s she invented a new medium called PHSColograms, 3-D images that combine photography, holography, sculpture and computer graphics to create what she calls “immersive” experiences.

The group will use PHSColograms, sculpture, 3D printing, virtual reality and projection mapping in a body of work that will eventually be on display at the lab.

“We want to tell the story with scientific visualization and also with abstraction,” Sandor says. “But all of the images will be exciting and artistic.”

The value of such rich digital visuals lies in what Sandor calls their “wow factor,” according to Sam Zeller, neutrino physicist and science advisor for the artist-in-residence program.

“We scientists don’t always know how to hit that mark, but she does,” Zeller says. “These three-dimensional immersive images come closer to the video game environment. If we want to capture the imagination of school-age children, we can’t just stand in front of a poster and talk anymore.”

As co-spokesperson of the MicroBooNE experiment, Zeller and team are collaborating with the artists on virtual reality visualizations of a new detector technology called a liquid-argon time projection chamber. The detector components, as well as the reactions it detects, are sealed inside a stainless steel vessel out of view.

“Because she strives for scientific accuracy, we can use Sandor’s art to help us explain how our detector works and demonstrate it to the public,” Zeller says. 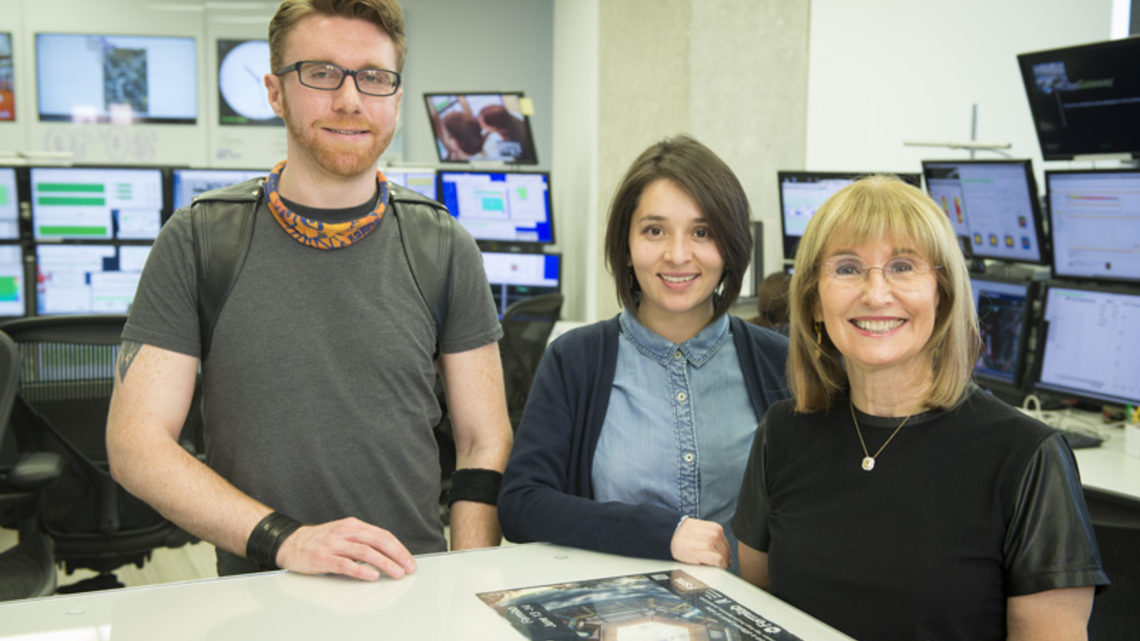 According to Monica Bello, head of Arts@CERN, programs that combine art and science are a growing trend around the globe.

US nonprofit Leonardo, The International Society for the Arts, Sciences and Technology, supports cross-disciplinary research and international artist and scientist residencies and events.

“However, programs of this kind founded within scientific institutions and with full support are still rare,” Bello says. Yet, many labs, including TRIUMF in Canada and INFN in Italy, host art exhibits, events or occasional artist residencies.

“While we don’t bring on full-time artists continually, TRIUMF offers a suite of initiatives that explore the intersection of art and science,” says Melissa Baluk, communications coordinator at TRIUMF.  “A great example is our ongoing partnership with artist Ingrid Koenig of Emily Carr University of Art + Design here in Vancouver. Koenig tailors some of her fine art classes to these intersections, for example, courses called ‘Black Holes and Other Transformations of Energy’ and ‘Quantum Entanglements: Manifestations in Practice.’”

The collaboration invites physicists to Koenig’s studio and draws her students to the lab. “It’s a wonderful partnership that allows all involved to discover news ways of thinking about the interconnections between art, science, and culture on a scale that works for us,” Baluk says.

Fermilab’s robust commitment to the arts reaches back to founding director, physicist and artist Robert Wilson. His sculptures are still exhibited around the lab, says Georgia Schwender, curator of the Fermilab Art Gallery.

Schwender finds that art-science programs attract the community through the unconventional pairing of subjects; events such as the international Art@CMS exhibit last year at Fermilab are very well received.

Fermilab recently complemented its tradition of cultural engagement with a new artist residency, which began in 2014 with mixed media artist Lindsay Olson. 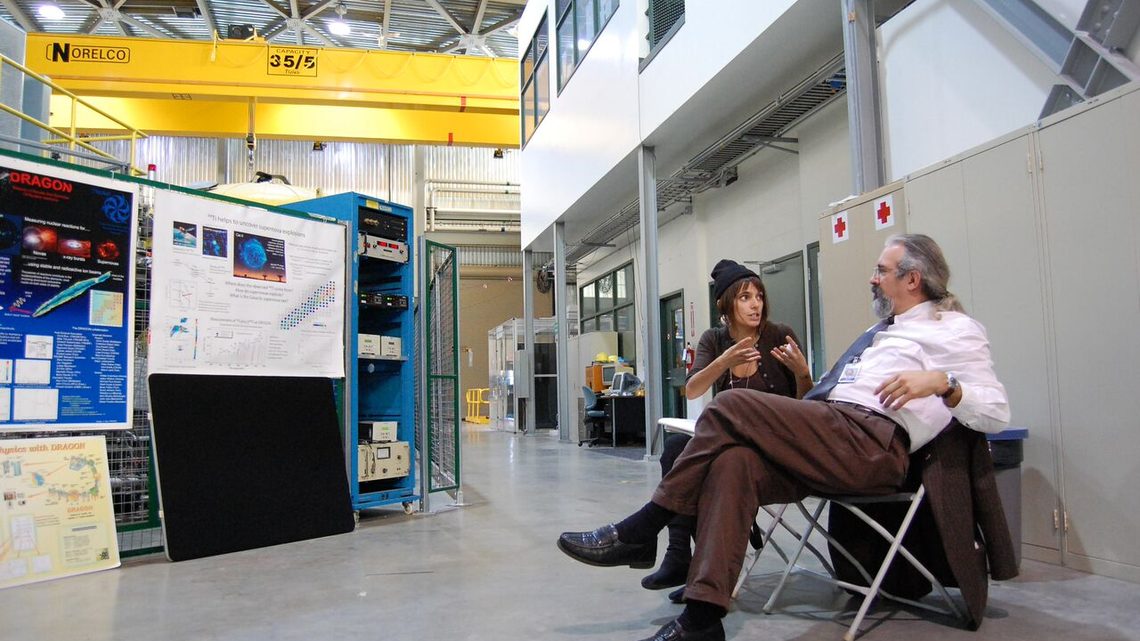 Science as a subject for art has grown since Sandor’s first PHSCologram of the AIDS virus bloomed into a career of art-science collaborations.

“In the beginning it was almost practical. People were dying, and we wanted to bring everything to the surface and leave nothing hidden,” the artist says. “By the 1990s I realized that scientists were the rock stars of the future, and that’s even truer today.”

Sandor relishes being part of the scientific process. Drawing out the hidden beauty of particle physics to create something scientifically accurate and artistically stunning has been one of the most satisfying projects to date, she says.

Like Sandor, Semiconductor works with authentic scientific data, but they also emphasize how the language of science influences our experience of nature.

“The data represents something we can’t actually see, feel or touch,” Jarman says. “We reference the tools and processes of science and encourage the noise and the artifact to constantly remind people that it is man observing nature, but not actually how it is.”

Both Zeller and Alvarez-Gaume have personal interests in art and find value in the similarities and differences between the fields.

“Our objectives are very different, but our paths are similar,” Alvarez-Gaume says. “We experience inspiration, passion and frustration. We work through trial and error, failing most of the time.”

Like art, science is abstract but enjoyable, he adds. “Theoretical physicists will tell you there is beauty in science—a sense of awe. Art helps bring this to the surface. People are not interested in the details: They want to get a vision, a picture about why we think particle physics is interesting or exciting.”

Zeller finds her own inspiration in art-science collaborations.

“One of the things that surprised me the most in working with artists was the fact that they could articulate much better than I could what it is that my research achieves for humankind, and this reinvigorated me with excitement about my work,” she says.

Yet, one key difference between art and science speaks for the need to nurture their growing intersections, Alvarez-Gaume says.

“Science is inevitable; art is fragile. Without Einstein it may have taken many, many years, and many people working on it, but we still would have come up with his theories. If Beethoven died at age 5, we would not have the sonatas; art is not repeatable.”

And a world without art is not a world he would like to imagine.

Labs around the world open their doors to aesthetic creation.