Kristin Bennes is best described as a long-time student advocate who continually seeks to improve student services and educational experiences. With an extensive background in both Student Life and Academic Advisement, Kristin is taking on a new challenge. She is working to develop an interdisciplinary STEAM (Science, Technology, Engineering, Art, and Mathematics) program for Glendale Community College. Kristin feels that the combination of STEM together with the arts, design and humanities is the key to helping to prepare students for the challenges and opportunities of the 21st century.  Kristin earned her Associates degree at Glendale Community College with a solid foundation in Biology and Psychology before completing a BA in History including a minor in Spanish at Arizona State University. She also has a Masters in Higher Education from Northern Arizona University where she focused on co-curricular teaching and learning.  Born on the Puget Sound, and growing up near the Mississippi River and the Minnesota lakes, Kristin has always been connected to and passionate about water, nature and environmental science.  Combine that with a large family, parents who were both teachers, artists, and musicians and you will begin to understand why she gravitates towards STEAM.   She enjoys all things DIY, woodworking, traveling, and photography and wishes there were more time for learning new things.

Jerilyn Yazzie currently attends Glendale Community College and wants to pursue a degree in Sustainability, BS, with an emphasis on Chemistry/Agriculture. Jerilyn understands the importance of collaborating creativity and artistry, with STEM. She is the founder of Shi yoo’, a self-made jewelry business. Solar energy, agriculture and living sustainably are her biggest concerns for preserving the world we live in regards to future outcomes. Jerilyn recognizes the pivotal importance of STEAM and is looking forward to her future as a member of the STEAM army.

Anthony Garcia was born into a lower middle class family, raised by his mother, aunts and grandparents; Anthony’s father decided not to be a part of his life. From an early age, Anthony developed an appetite for learning and art; he worked obsessively on honing drawing and artistic skills. Anthony’s grandfather, who taught elementary level art, encouraged him by providing art supplies and support. Anthony often received accolades for his artwork.  All the encouragement he received formed a lifelong respect for those who nurture talent and a rich love of craft.  Anthony attended a magnet school for gifted artists where he began to acquire interdisciplinary interests in Mathematics, Biology, Philosophy and Psychology.  He read voraciously, becoming a lover of big ideas and big mysteries of the Mind and Cosmos.  Anthony started College at Glendale Community College for a Fine Art degree at in his 20’s.  Years later and much older, but still optimistic, he has returned to Glendale Community College and Estrella Community College to complete transfer requirements for a Biology degree. He plans to further his education and interests in Neuroscience while using his artistic and creative work to finance this bold plan. Anthony’s current reading list are: Creativity: the Psychology of Discovery and Invention by Mihaly Csikszentmihalyi; Epigenetics: The Ultimate Mystery of Inheritance by Richard C. Francis; & Intuition Pumps and other Tools for Thinking by Daniel C. Dennett.

Curie’s biography. Marie Curie’s biography made Monica dream of one day becoming a scientist. During her childhood she recalls being exceedingly interested in how computers worked. Monica spent several years exploring computers as her primary hobby. Then her senior year of high school arrived and she realized that she had not thought about a career path. She spent several months pondering on what profession she should choose. She decided to major in computer science. She is currently attending Glendale Community College and is working towards a BS in computer science. Having no prior knowledge on STEAM she was unaware of its true meaning, but after discovering its significance she understands that the addition of art will open up a world of infinite opportunities. She is extremely eager to begin her journey as part of the STEAM Team.

Kasey is an introvert with the occasional outburst. Some might call him strange, though he prefers the term 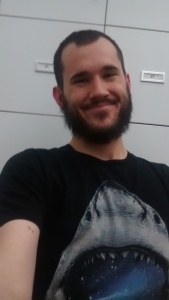 eccentric. Kasey can ramble on endlessly if you let him, one subject flowing into the next. It is wise to develop a non-verbal cue of “come back out of your head” when this happens. Kasey means well, but makes mistakes; albeit making them with style if he can help it.

He is presently employed at a space museum and previously as a conservation crewmember. His interests range from astrobiology to video game design and anything in between. Really his attention flits about like a moth towards whatever flame catches his eye. STEAM is just the right fit for Kasey’s educational needs.