Thanks to Chaunda Fraulino and all of her hard work in making this happen every year. We have continually gotten better in this competition and I hope you all improve next year too.

Also thanks to all of you for doing your part and recycling, reducing, and reusing. This would not have been possible without an environmentally conscious student body and employees.

2016 RecycleMania Tournament
February 7 – April 2, 2016
Final Results
Glendale Community College (GCC) competed with 276 colleges and universities nationwide in the 2016 RecycleMania tournament from February 7 – April 2.  The four Arizona participants included Arizona State University, Glendale Community College, and the University of Arizona. GCC reduced the amount of waste per person from 8.63 lbs. in 2015 to 7.61 lbs. in 2016 earning a 3rd place finish in the 2016 Waste Minimization competition.
The goal of waste minimization is to reduce overall waste (trash plus recyclables) through waste reduction activities such as the Zero Waste Program.  As a direct result of our success in waste minimization, our placement in other categories is higher.  The final results in all categories are listed below.
2016 RecycleMania Final Results
Grand Champion
103 out of 207Per Capita Classic
249 out of 269Gorilla
222 out of 276

Waste Minimization
3 out of 114

Corrugated Cardboard
93 out of 97

Our cumulative GHG (Greenhouse Gas) Reductions during the competition are 58 Metric Tons of CO2 Equivalent, or 11 cars off the road, or the energy consumption of 5 households.

About RecycleMania
This is GCC’s 6th year participating in the RecycleMania tournament.  The tournament ran from February 7 – April 2, 2016. RecycleMania is a friendly competition and benchmarking tool for college and university recycling programs to promote waste reduction activities to their campus communities. Over an 8-week period, schools report recycling and trash data which are then ranked according to who collects the largest amount of recyclables per capita, the largest amount of total recyclables, the least amount of trash per capita, or has the highest recycling rate overall.
Website:  http://www2.gccaz.edu/departments/administrative/facilities-management/recycle-program/RecycleMania
Congratulations GAUCHOS!
April 22, 2016April 21, 2016 by steamgcc Categories: Arizona, Culture, Earth Day, Environment, Event, GCC, Recycle, Recycling, Science, STEAM, STEM, SustainabilityTags: Arizona, Environment, Gauchos, Glendale Community College, Recyclemania Tournament, Science, STEAM Leave a comment 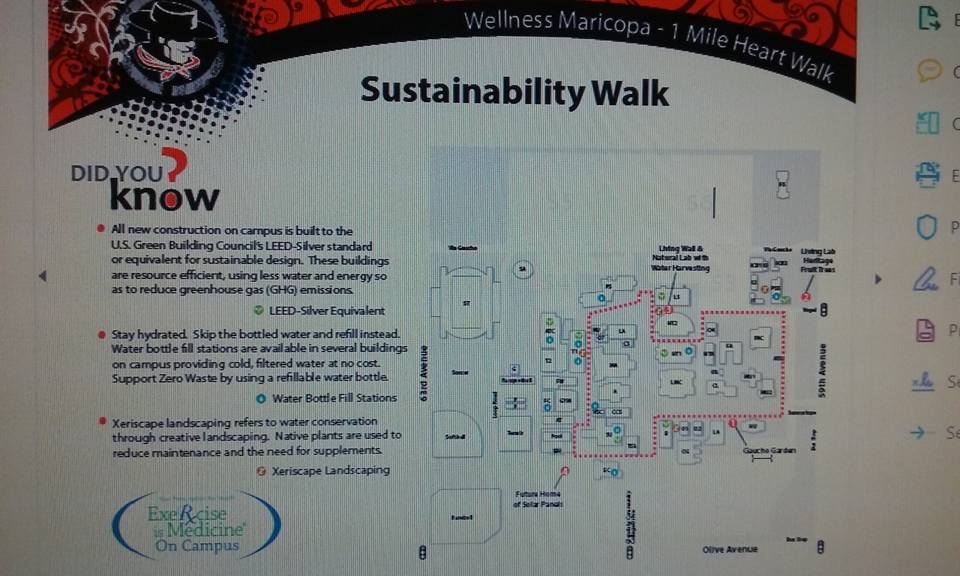 There no better day than Earth Day to take a 15-20 minute break and enjoy the 1-Mile Sustainability Walk (see attached map).  This is a great opportunity to see our beautiful campus and learn about sustainability initiatives.

Photo for ya! We sorted through garbage according to waste; metals, paper, plastic, and garbage (aka non recyclables). This is one day’s garbage from all over the GCC campus.